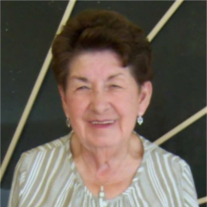 Age 86, Ruby took her last breath on earth and her first one in Heaven, Saturday, July 16, 2016, after a long battle with Alzheimer’s. Ruby was a beloved mother, grandmother, and sister. Ruby is life long resident of Bernalillo, NM.

She is preceded in death by her parents, Eufelia and Francisco Mora, her beloved husband, Senon Valencia, and daughter Mary Valencia, siblings Tomasita, Oracio, Frank Mora, and Hoby Griego.

Ruby enjoyed her family, bingo, San Lorenzo Fiestas, cooking, outdoors, being a Senior Companion in her beloved community, and her strong faith in our Lord Jesus Christ.

The family would like to thank her great grandson Anthony Apodaca who helped take care of Grandma, along with the entire family who spent time with grandma praying with her and for her.

To order memorial trees or send flowers to the family in memory of Ruby Valencia, please visit our flower store.