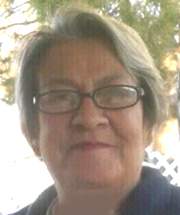 Sharon A. Herrera, age 51, beloved wife, mother, and sister, was embraced by the Lord Thursday, September 13, 2018 and taken to her heavenly home.  She was born and raised in Pena Blanca, NM and was a resident of Albuquerque, NM.

A Rosary will be recited Wednesday, September 19, 2018, 10:00 am at Our Lady of Guadalupe Catholic Church in Pena Blanca, NM, followed by the Mass of Christian Burial at 11:00 am.  Interment will take place at the Pena Blanca Cemetery.  Casket Bearers will be David Jr., Jake, Frankie, Leonard, Lawrence, Jason, Raymond, Joey, Robin, and Joseph.   Honorary Bearers will be Michael, Frank, Arthur, Alex, Ruben, Joseph, Uncle Bob, Ruben Jr., Seven, Richie, and Donavan.

Those who wish to express their condolences may visit www.danielsfuneral.com

To order memorial trees or send flowers to the family in memory of Sharon Herrera, please visit our flower store.