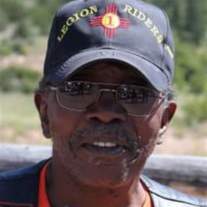 Williams, Shirley Bain "Lee" age 72, beloved father and brother, passed away Saturday, October 8, 2016.   He was a resident of Albuquerque, NM.  Lee loved when people would call him, he enjoyed traveling, fishing, golfing and riding his motorcycle.  He loved people and never met a stranger.  Lee was a gentle soul who never lost his temper and was loved by many.

Lee served 20 years in the Armed Forces and was awarded many decorations; a few to mention are The Purple Heart Medal, 2 Army Commendation Metals, 1 Vietnam Campaign Metal, Gallantry Cross Metal, 2 Overseas Service Metals, Army Service Metal, National Defense Service metal, 4 Good Conduct Metals, Combat Infantry Badge, and a Parachutist Badge.  He served in Vietnam from 64 to 66 with the original 173rd and 82nd airborne; and 1st Calvary.  Upon retiring from the Army, he worked as a Traffic Management Coordinator at McGuire Air Force Base.  He later transferred to Kirkland Air Force Base and worked as a Transportation Manager for the 377th air squadron until he retired again in 1998.

Our family thanks you for your kind expressions of sympathy.  Maybe you sent a card or called to ask how we were doing. Maybe you said a prayer on our behalf.  Whatever manner it was it was deeply appreciated.  The Williams Family.

To order memorial trees or send flowers to the family in memory of Shirley Williams, please visit our flower store.