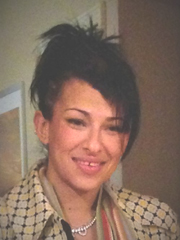 Age 36, beloved mother, daughter, sister, and fiancée, was embraced by the Lord Friday, December 1, 2017 and taken to her heavenly home. She was a lifelong resident of Albuquerque, NM.  Stephanie graduated from Cibola High School in 1999 and sought her career in the medical field and was working at Presbyterian Rust Hospital for the past five years.  Stephanie enjoyed cooking, baking, decorating for the holidays, and entertaining her family and friends.

She was preceded in death by her father, Nick Baca; maternal grandmother, Alice Montaño; paternal grandparents, Eloy and Flora Baca.

Stephanie is survived by her precious children, Nickolas A. Baca, Nickole Jaramillo, Chance Jaramillo; her fiancé, Jacob Jaramillo; her loving mother, Emily Montaño; her sister, Elaine Baca and fiancé, Andrew Outland; grandfather, Leo Montaño; honorary step-father, George Aragon; step-sister, Kim Olivas; and many loving aunts, uncles, relatives and friends.  Stephanie will be greatly missed by her loving family and by those whose lives she touched.

Stephanie's Care Is Entrusted To:

To order memorial trees or send flowers to the family in memory of Stephanie Baca, please visit our flower store.