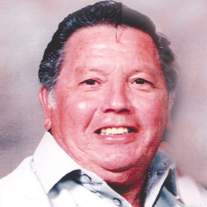 Tony "Chief" Gonzales, age 87 of Albuquerque, NM, passed away peacefully at his home on Tuesday, February 21, 2017, while surrounded by his loving family.  He was born on December 19, 1929 in Santa Fe, NM to the late Madadeno and Libradita Gonzales.  Tony was a devoted husband, father, grandfather, and great-grandfather.  He was a proud Veteran of the United States Army who served his country during the Korean War.  Tony served 42 years as an Architect with the Corp of Engineers in Albuquerque..

He was preceded in death by two children, Nina Carter and Gene Gonzales; and brothers, Benny and Jerry Gonzales.

To order memorial trees or send flowers to the family in memory of Tony Gonzales, please visit our flower store.