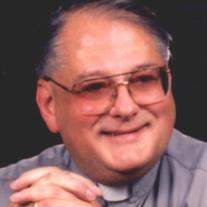 Father Vincent G. DeFazio went to be with the Lord, Sunday, March 22, 2015, while surrounded by his loving family.  He was born in Staten Island, NY on June 17, 1937.  Vincent was a retired Vietnam Veteran who ranked in many different branches of the military, including his highest rank as a Colonel in the United States Navy.  During his years as a Captain in the United States Army he adopted his two sons from South Korea.  After retiring as a registered nurse and spending 12 years in the Public Health Service, Vincent became an ordained Roman Catholic Priest.  He was a member of the Archdiocese of Santa Fe and served his time at many different Churches throughout New Mexico.  He received his BS in Nursing, BA in Philosophy, MA in Counseling Services, a MAPM in Hispanic Ministry, and his MA in Divinity from St. Thomas Seminary in Denver, CO.  Vincent will be remembered for his kind compassion and his witty sense of humor. He was a person of great knowledge and was an avid collector of coins, stamps, and gem stones.  In the last years of his life he enjoyed traveling, cooking, and spending time with his little dog, Lily.
He was preceded in death by his oldest son, Gerald.  Vincent is survived by his son, Vince and his wife Debbie; his loving grandchildren, Kimberly and Dustin; and his great-grandchild, Bailey Lou.  Also surviving are his two younger brothers, Sammy and John.
Visitation will be Wednesday March 25, 2015 from 6:00 p.m. to 7:00 p.m. at Risen Savior Catholic Church, 7701 Wyoming Blvd., NE, where a Rosary will be recited at 7:00 p.m.   Mass of Christian Burial will be celebrated Thursday at 10:00 a.m. also at the Church.  Interment will follow at Gate of Heaven Cemetery.

To order memorial trees or send flowers to the family in memory of Fr. Vincent DeFazio, please visit our flower store.